Matthew Gannon '22 Has Been Named a Marshall Scholar

Posted on December 13, 2021 by Hannah Silverstein

An advocate for the homeless, Gannon will pursue graduate study in the U.K. 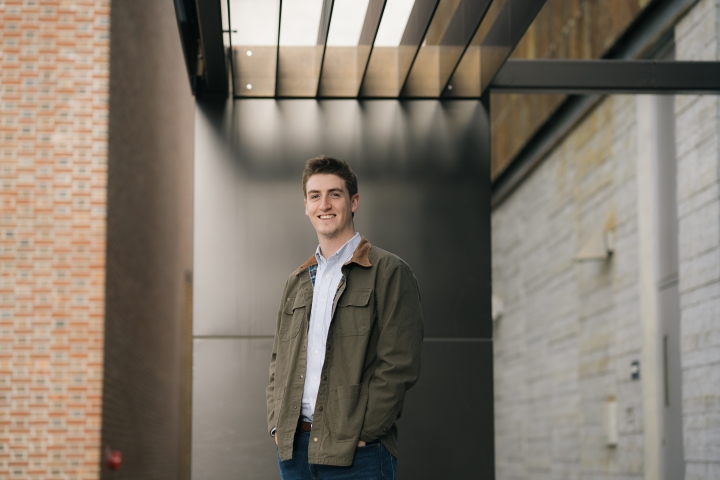 As a Marshall Scholar, Matthew Gannon ’22 will study at Manchester University next year. (Photo by Eli Burakian ’00)
Body

Matthew Gannon ’22—a film and media studies major modified with sociology and a member of the West House residential community—has won a 2022 Marshall Scholarship. He joins a cohort of 41 scholars in the prestigious program, which funds graduate study for top American students at academic institutions throughout the United Kingdom.

“A gifted filmmaker who understands the broader social implications of the stories he tells, Matt Gannon is one of those extraordinary students who uses his gifts to empower others,” says Interim Provost David Kotz ’86. “It’s exciting to see the Marshall selection committee recognize Matt’s intellectual risk-taking, hard work, and humility, which are hallmarks of the strong liberal arts education Dartmouth offers.”

Gannon, who grew up in Bethesda, Md., is passionate about the power of film to make a social impact. Through Marshall, he plans to earn a master’s in sociology at the University of Manchester and a master’s in film directing at the University of Edinburgh. He hopes eventually to pursue a doctorate in sociology, “researching the stigma of homelessness while working on the ground to reduce it,” he says.

“As a Marshall Scholar, I can conduct research, create collaborative documentaries, and engage in service that would not otherwise be possible,” he says. “It’s an invaluable opportunity to grow as a scholar, artist, and citizen.”

The pandemic immersed me in justice work, orienting my activism, academics, and creative practice toward forging a kinder world.

Gannon has produced documentaries that have “raised thousands of dollars for people experiencing homelessness,” he says. His film Under the Bridge, co-created for a Dartmouth class, won the Best Student Documentary award at the Global Impact Film Festival in Washington, D.C. for its portrayal of a homeless man.

The social inequities exposed by the COVID-19 pandemic inspired Gannon to intern with the American Civil Liberties Union, creating media advocating for racial equity and prison reform. He was also an editorial and video storytelling intern with the homelessness advocacy group Street Sense Media, for which he received funding from the Dartmouth Center for Social Impact.

“The pandemic immersed me in justice work, orienting my activism, academics, and creative practice toward forging a kinder world,” he says.

“We extol Dartmouth as a place where students can learn how to do impactful research that changes the world for the better, and Matt has embodied this,” Houle says. “Rarely are students able to master and combine insights from multiple disciplines, but Matt is doing so at a very high level. More importantly, Matt is a deeply kind and empathetic person, and is fundamentally interested in how we can make society a better place, especially for marginalized people. I have no doubt that he is going to not only become a skilled researcher, but a powerful advocate for social justice.”

For his culminating project for his major, Gannon is creating three collaborative documentary profiles of people experiencing homelessness, “aiming to reduce their stigmatization through decolonized filmmaking,” he says.

As a research assistant for Associate Professor of Sociology Emily Walton, he is working on a documentary to explore the comparative mortality rates among Black and white Dartmouth alumni. He has also served as a teaching assistant in film and media studies.

Among his Dartmouth activities, he is vice president the Dartmouth Cords a capella group and a member of the improv comedy group Dog Day Players, the Hill Winds Society, and—as an avid whitewater kayaker—the Ledyard Canoe Club. He also has been a shelf volunteer at the Upper Valley Haven.

Of receiving the Marshall, Gannon says, “I’m incredibly grateful to have received this scholarship. I owe this opportunity entirely to the guidance of my professors, the support of my family, and the generosity of my friends.”

For information about applying for Marshall and other programs, visit Dartmouth’s Fellowship Advising Office.