Reading workshop: Jacques Lacan, "The Subversion of the Subject..."

Please join the Psychoanalysis Study Group for a reading workshop led by Dr. Todd McGowan (U of Vermont) on Jacques Lacan's essay "The Subversion of the Subject." 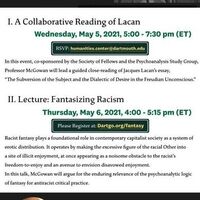 Please join the Psychoanalysis Study Group for a reading workshop on Jacques Lacan's influential essay, "The Subversion of the Subject and the Dialectic of Desire" led by Dr. Todd McGowan (U of Vermont), a foremost expert on Lacan and psychoanalytic theory. We will be doing a line-by-line exegesis of the last ten pages of this essay, which was one of the most important influences on French theory in the latter half of the 20th century, and discussing concepts such as desire, the structure of speech, the address to the Other and the death drive. Todd McGowan, Professor of English and Film at the University of Vermont, is the author of nearly a dozen books on philosophy, psychoanalysis and film theory, including Capitalism and Desire: The Psychic Cost of Free Markets (Columbia UP, 2016) and Emancipation After Hegel: Acheiving a Contradictory Revolution (Columbia UP, 2021) and the founding organizer of LACK, an annual academic conference on psychoanalysis and critical theory.  Please email humanities.center@dartmouth.edu to RSVP and to receive a copy of the text.