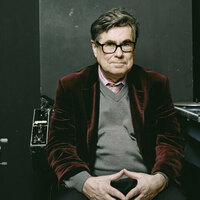 Eros and Wonder is an extended journey into image manipulation, crossing chemical transformations of the image with electrical modifications to produce a fantasia of vibrant forms that suggest an erotic wonder at the world’s surfaces. The experiment, a first of its kind for Elder, combines a variety of techniques via new software designed by Elder. Since 1975, Elder has built two formidable cinema cycles, “The Book of All the Dead” (40 hours) and “The Book of Praise” (15 hours) of which Eros and Wisdom is an autonomous unit. Robert Haller was an ardent supporter of Elder’s cinema presenting the first full screening of “The Book of All the Dead” in 1987.

“All of Elder’s films are obsessively concerned with ultimate questions of love and Be-ing, of Death and meaning, of the search for God and the spiritual at a time when such a quest has either been largely abandoned, or left in the hands of fundamentalists and cynical politicians.” —Robert Haller

BIO: R. Bruce Elder is a Canadian filmmaker, software developer, scholar and author of Cubism and Futurism: Spiritual Machines and the Cinematic Effect (2017). His achievements were recognized by the Governor General’s Award in Visual and Media Arts, Canada’s most prestigious award, and the Royal Society of Canada.